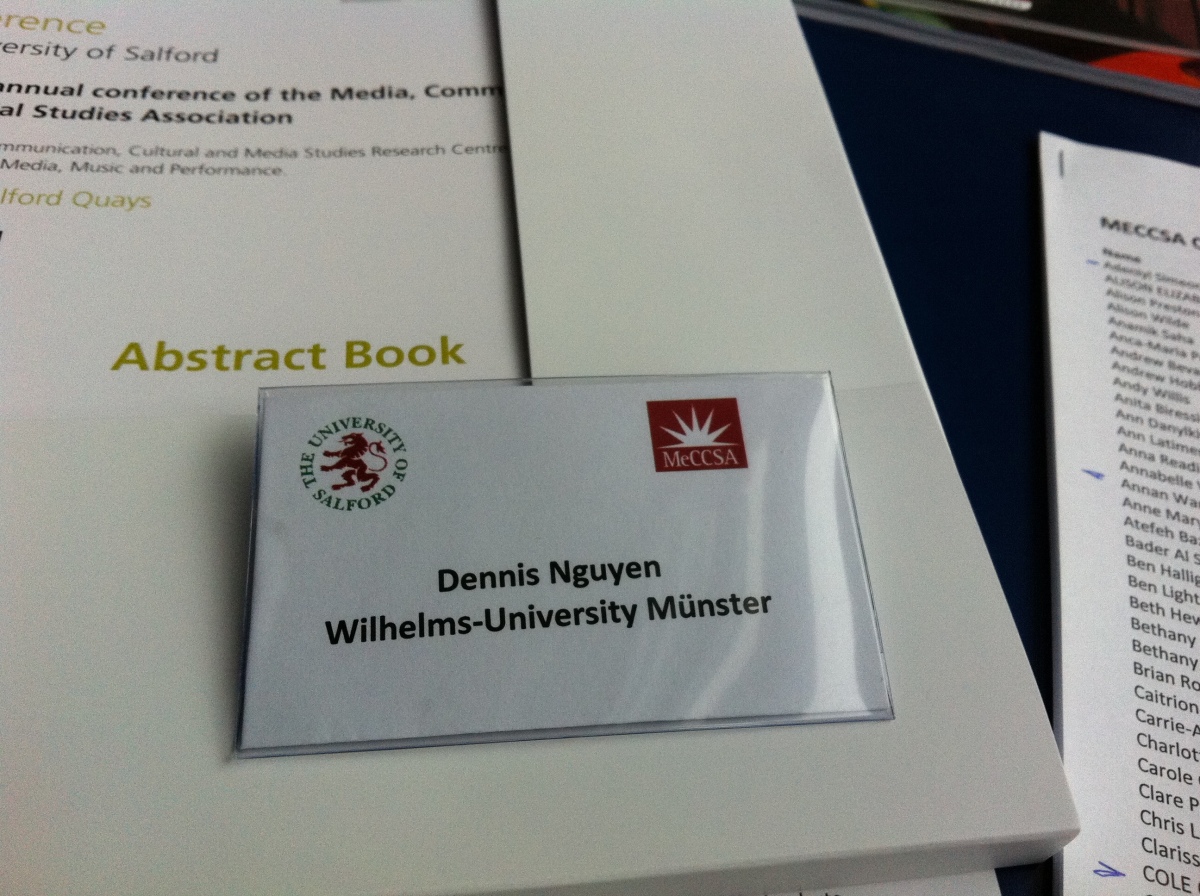 It has been a while since I have posted the last article – so  many things happened in the meantime, that I am hardly able to keep pace with all these interesting developments and events in and around the media (especially as regard Wikileaks but I will focus this in another post; however, there is a very interesting article in the current issue of the New Statesman I can recommend). There was just to much to do, for instance preparing my conference paper for this year’s Media, Communication, and Cultural Studies Association Conference (MeCCSA) at Salford, Greater Manchester. I just returned from this very interesting, informatory trip to Northern England and will provide here a summarization of my experiences and impressions.

Let me begin with some information on MeCCSA: It is an international organisation for academics in media-, communication-, and cultural studies with a keen interest in stimulating intellectual exchange across all relevant disciplines. However, “international” only to a certain extent as it is mainly based in the UK. Its main aim is to promote the diversification of influences on as well the professionalization of research in the relevant field of subjects. Since 2000 it holds an annual conference, each year at another of Britain’s universities. Former places of event included for instance the 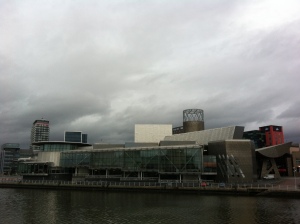 London School of Economics, University of Cardiff, University of Leeds etc. etc. MeCSSA 2011 was hosted by Salford University’s department for Communication, Culture, and Media, which organized a warm welcoming to and professional course of the conference in the very appealing Lowry, a huge, postmodern theatre builiding at the Salford quays – right beside the BBC studios and MediaCity UK. This year, around 140 researchers presented their current or recently finished projects on topics ranging from digital culture, media and democracy, visual- and film arts, gaming, media education, media discourses, journalism – you name it. Many of the contributors have a long professional career in academics, and I knew quite a few names from publications I had read during my studies (e.g. Stuart Price). I listened to delegates from New York, Toronto, London, Copenhagen so on and so forth. Interestingly, I was the only contributor from Germany…I think here is a clear lack of communication between the German and the international academic discourse on the respective issues detectable. In fact, I think I was the only one without a Ph.D and who had not published any article or a monograph (yet), too. Hence it was a great opportunity to get in touch with some bigger and smaller “grandeurs” of this specific academic branch. Besides, I gathered some impressions from other research projects and their perspectives on relevant issues. I thereby primary attended panels which dealt with topics of my personal academic interest, such as political communication, democracy and media etc. Especially the delegates from Cardiff University, Goldsmiths, London

Metropolitan, and East Anglia provided some really interesting papers. During my panel, I was allowed to present the results of my MA research project on political communication online during last year’s general election. My audience was rather small but consisted of genuine experts in this area of research – luckily, they liked what I showed them and I was able to establish important contacts with possible supervisors for my Ph.D. After my presentation and the subsequent discussion, which provided further stimuli for future research, I took the chance to visit the Imperial War Museum North – after all I’m a student of history, with particular interest in the events of the 20th century of which war is an inherent part. Here I got a glimpse on the commodification of British and world military history. But that will be the topic of another post. Altogether, it was a very interesting and pleasant experience – I will definitely apply for next year’s conference again. I can only recommend to those of you, who see their future in academics, to do so as well! It is a great chance for professional exchange and to make some interesting connections. It is also a very satisfying experience to receive positive feedback and recognition for your own research. Next MeCCSA will be held at the University of Bedfordshire.

Due to my own family roots in Vietnam and my professional interest in history, I read a lot of publications concerning the Vietnam War during the last years. Most books have been published in the US, where various positions on the war, its cause, and outcome exist. The many voices which comment this significant, controversial event of the cold war (which was in fact a very hot one) range from total damnation to actual justification of the US engagement between 1965 and 1972. A neutral observer of this specific historical discourse could thereby draw clear lines between the different political backgrounds of the various authors (mostly a dichotomy of liberal and conservative point of views).

I would like to present here two very interesting books on the issue. They are recommendable to readers without any knowledge about the “10.000 days of war” (Arnett 1980) in Vietnam as well as to those who have already worked on the topic.

This compendium of different interviews with contemporary witnesses from all sides, which were involved in the conflict, is one of the most important pieces of recorded oral history on the event. The author interviewed generals, soldiers, nurses, reporters, peace activists, relatives and many more people to create this comprehensive documentation. The honest reports, which are partly very emotional, are structured into six chapters – which cover the conflict from its roots in the 1950s to its end in 1975, when Saigon fell to the communist forces. The various interviews are connected by the author’s descriptions of the historical context, and each interviewee is briefly introduced.

Appy provides thereby a fair account of the war – the result of many years of meticulous research and extensive talks. The reader gets a profound impression of the Vietnam War and the course it took, but also learns about individual fates which are just typical for this disastrous conflict: On the one hand, there are for instance a simple GI who left Vietnam as a cripple but feels no anger for his former enemies, a nurse who learnt to hate the Vietcong and was reluctant to help wounded captives, and a Japanese-American GI who at first was a target of anti-asian racism by his comrades before he started to disregard the Vietnamese as human beings himself. On the other one, a Northvietnamese woman tells about the hard work and deprivations while establishing the infamous Ho-Chi-Minh-Trail, another Northvietnamese man explains how he was taken out of the rice field and put into a Russian fighter jet, and a NVA veteran reports how he tries to find the remains of missed Vietnamese since 1977 until today.

Furthermore, people who were not directly involved in the fighting or who never even touched Vietnamese soil speak out, too – and their reports show how a conflict thousands of miles away can become very close in an instance: Politicians, who had at the time no idea of the true nature of Vietnamese culture, admit their mistakes, activists in the civil rights and peace movement report on their experiences at the so-called ‘home front’ and other testimonies show that the pain of losing a relative seems to endure forever.

By combining accurate descriptions of the general historical events with a pluralistic choice of interviews, this intriguing book is not only highly informative but also quite thrilling (even touching) to read. Especially due to the fact, that the provided accounts are non-ficitonal.

This monograph is recommendable to ‘beginners’ and provides an overview of the conflict, supported by contemporary documents. It covers the most important developments which led to the war and influenced its course and outcome. The author included also an thorough bibliography, which hints to various important publications on the issue. All those, who do not know much about the Vietnam War and want to make a start should take look on this book.

There are also numerous documentaries on the conflict. I will present some worth seeing in a later post. However, I would like to name here The Fog of War – Eleven Lessons from the Life of Robert S. McNamara, another piece of oral history – this time captured on film. The documentary was directed by Errol Morris and won the Academy Award for best documentary in 2003. In this film, Robert S. McNamara, who has been U.S. secretary of defense during the war gives his accounts of war in general as well as on his role in the Vietnam Conflict.

Spam, surfing, Netizen, Blogosphere, Twitterverse – the World Wide Web is interspersed with metaphorical expressions, which most of us use quite unquestioned and self-evidently. These and many other vocables became inherent part of our contemporary lexicon. But where exactly do all this terms come/derive from? What is their precise meaning and what is the motivation to use them? Those of you who have at least a bit of linguistic curiosity will find answers to such questions on Metaphor Lookout. Written from the academic perspective of an postgraduate linguist (English and French), this blog collects and examines Internet-/computer metaphors – and gives elaborate yet comprehensible explanations for each word. Very interesting and quite entertaining to read. Recommendable for all those, who want to know more about the language of online information societies.

Click the link above or here, to get there.

During the last weeks I had the chance to read / skim some interesting books – some of them might become handy for you as well. Here I briefly digest the most important ones to me:

This book provides a comprehensive collection of essays on scientific methodologies in media and communication studies. It is structured in three main parts, each consisting of at least two articles. Part one gives an historical introduction into research methods in media and communication studies. The focus is put on the humanities in media / communication research and sociological approaches. Part two deals with systematics and processes of mediated communication. The articles in this chapter are subdivided into four categories: texts on media organizations, media texts, media audiences and media contexts. The third and last part focuses scientific approaches and social applications; the articles of this chapter describe quantitative and qualitative research processes as well as the complementary use of both approaches in one project. Regarding our own MA projects, this book can be very helpful to develop an appropriate scientific method.

This work subsumes the current state of research on the New Media. It provides a comprehensive and elaborate conjunction of theoretical approaches and practical examples. Topics are New Media and New Technologies, New Media and Visual Culture, Networks, Users and Economics, New Media in Everyday Life and Cyberculture. Therefore, the book deals with a wide range of issues we discussed in Information Societies so far. The reader gets an widespread overview of the topic(s) and can use this as a basis for further research.

Despite the fact that Webster’s book is a bit older than other, similar publications, it still gives a good introduction into the discussion on information societies. He focuses the ‘shape’ of information in modern, post-industrial societies, especially in a capitalistic context. Though the huge changes caused by the internet were at the time of publication only at the beginning, some of Webster’s basic observations, assessments and thoughts are applicable to current issues. A highly theoretical work, which postulates some knowledge in postmodernism and epistemology.

PR-campaigns are one of the countless sources which feed information into the continuously flowing data-stream of today’s media-/ information society. How to approach, assess, identify and finally create such PR information products? This book provides therefore a comprehensive, (academic) examination of this kind of media artefacts. It consists of five chapters, ranging from historical and theoretical foundations, campaign design and evaluation,  several case studies to new approaches and current challenges. The chosen articles set value on the combination of theoretical approaches and practical examples.